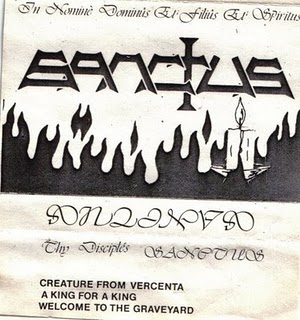 This was a London based heavy metal band that released two demos only. Unfortunately I haven’t had the chance to listen to their second demo, but this one is really good! “Thy Disciples” contains three songs which have a duration of at least seven minutes each. The best song of the demo is “A king for a King”. The style of the band is prog-ish heavy metal of the United Kingdom. The thing that makes this demo sound a bit progressive are the keyboards that the band uses. On this release the keyboards have their own unique sound and this makes the band stand out. The vocalist of the band Colin Bradley is really good too! The leader of the band seems to be San Remo who plays the bass and the keyboards and who played in a band called MARQUIS DE SADE (a really good N.W.O.B.H.M. band) before forming SANCTUS. The lyrics of the tracks were in the fields of sword ‘n’ sorcery and science fiction. For all the friends of N.W.O.B.H.M. this is a really good proposal!