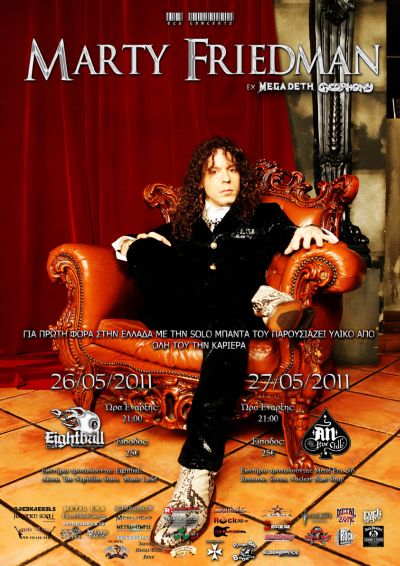 I took a friend and we went straight to the 8ball Club, a place that is in the region Ladadika of Thessaloniki. The club had about 200 people waiting for Marty Friedman. The concert was organized by GCA concerts a company that brought in Thessaloniki the last months bands like Whiplash, Assassin (Ger), Impaled Nazarene, Danny Cavanagh (ex-Anathema) & Anneke Van Girsbergen (ex-The Gathering), Sodom and Mayhem. Friedman was a in Hawaii when he formed Deuce. With them he released 3 demos which were later re-released in vinyl format (there is also a cd containing the 3 demos but this is a bootleg!!). Then he formed Vixen (not the all female band!!)   releasing 3 demos and an EP(Made In Hawaii). Vixen were renamed as Aloha and they released only a demo. Some of the Vixen songs were released in 2004 in a compilation named “The Works” in vinyl format also. Then he formed Hawaai releasing the albums “One Nation Underground” & “The Natives Are Restless” and an EP named “Loud, Wild and Heavy”. Then along with Jason Becker he created Cacophony where he released “Speed Metal Symphony” and “Go Off!”. As a solo artist he has released 10 albums while with Megadeth he released “Rust In Peace”, “Countdown to Extinction”, “Youthanasia”, “Cryptic Writings” and “Risk”.   So as you can see Friedman is an artist which can be characterized as productive! The last years he lives in Japan where he has his own TV Show.
Enough with prologue information now! Marty Friedman and his band went to the stage at 10.00 o’clock. Their show lasted 2 hours!! During the whole show the band had really a big amount of energy to give! The audience seemed to enjoy the show and even though there was an instrumental show the reaction of the audience was dynamic!  The band that was with Friedman were all of them from Japan. The image of the second guitarist reminded me bands like Tokyo Hotel (!!!) while the drummer of the band was really the one who caught our attention!! He had blond hair like some ‘80s glam bands while he had make up like some horror metal bands like Ripper and Halloween. He was really energetic and he used to stand upright in his seat and hit the drums with that way, the audience kept looking at him during the show! Friedman himself showed at the scene with a perfecto and a t-shirt saying wild child. He seemed really younger than he really is and he was in a really good mood.. The songs that bands played were approximately the following : Street Demon ,  It’s the Unreal Thing, Amagigoe ,Ballad of the Barbie Bandits , Tsume Tsume Tsume , Elixir ,Stigmata Addiction , Gimme a Dose , Cheer Girl Rampage , Forbidden City ,  Tornado of Souls (Megadeth song) , Devil Take Tomorrow , Letter (Ryota Yoshinari on vocals) , Novocaine Kiss , Angel ,Salt in the Wound ,Ripped
(including Takayoshi Ohmura guitar solo) , Yuki No Hana , Kaeritakunattayo ,Dragon Mistress  and Thunder March In the last two or three songs Gus G. (the current guitarist of Ozzy Osbourne and the leader of Firewind-he has also played with Dream Evil )  played with the band Their last song with which they closed their set was “Paranoid” from Black Sabbath!

Overall it was a good concert that the majority of the audience really seemed to enjoy!!! 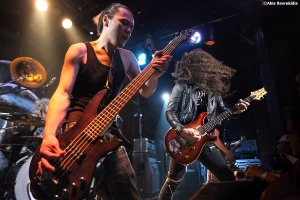 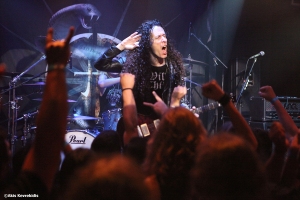