Crimson Glory, Wardrum, Out of the Lair, live report 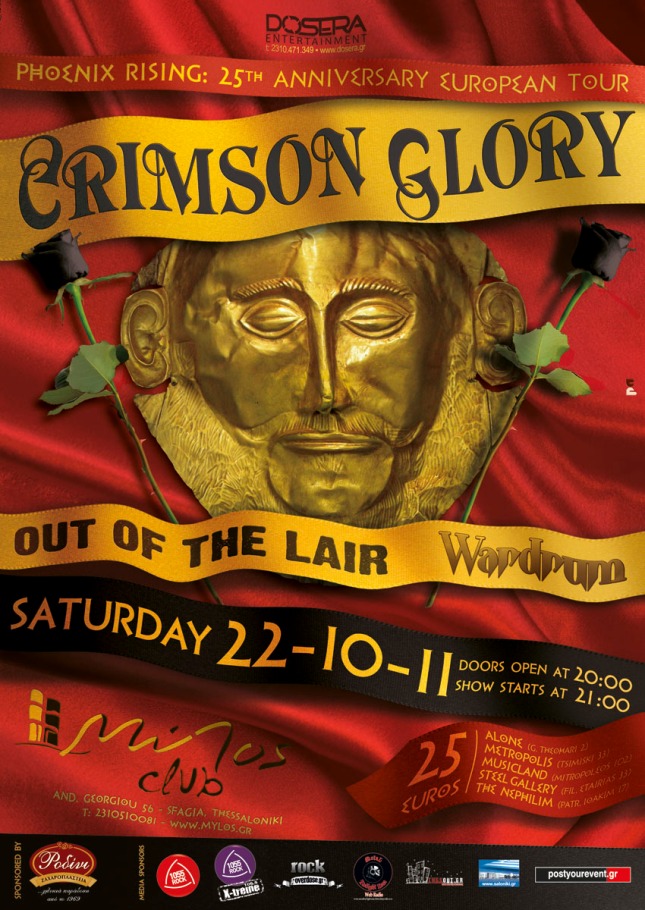 I took an old friend and we went to the club of Mylos, the place where the gig was going to be held.The live was organized by Wizard Live Productions which had brought in the past here in Thessaloniki really great groups like Jag Panzer. The show went  according to time schedule. I have to admit that this is rather unsual for a Greek metal gig.The show was attended by about 500 fans who craved to see the bands!! We went into the club 9:45 when the second band, Wardrum, started to play. Unfortunately we missed the first band of the show, Out of The Lair. Wardrum is a greek metal band from our city with a singer from Italy named Piero Laporale. I had the chance to watch Piero Laporale’s live performance 11 months ago along with Uli John Roth and his performance was really good!!! Wardrum released their debut album “Spadework”a couple of months ago from Steel Gallery Records. Wardum is a band with really talented musicians. The majority of them had performed with Horizon’s End and its line-up is Stergios Kourou on drums, Kosta Vreto on guitars (who also released  a really great solo guitar album from Steel Gallery Records) and Kostas Scandalis on bass (who made all the really great remaster work for the releases of Arkeyn Steel Records !!!). The band had also another guitarist for the show. Wardum played for about 45 minutes songs from their first album and a cover of “Neon Knights” from Black Sabbath’s “Heaven and Hell” album. Their sound was loud, clear and solid and their stage presence was good.

Then it was time for Crimson Glory  to come on stage. The band had the cover of their second album as a banner throughout their live perfomance. They were in a good mood, they were kinetic on the stage and their new singer Todd La Torre seemed to really fit in with the band. All the other band, except for the singer, were the classic Crimson Glory line-up with Jackson (guitars), Drenning (guitars), Lords (bass) and Brunell (drums). They played 1 hour and 45 minutes. They played all the songs which were on their first two albums namely “Valhalla”, “Dragon Lady”,”Heart of Steel”, “Azrael”, “Mayday” ,”Queen of the Masquerade”, “Angels of War” ,”Lost Reflection” from their first homonymous album plus “Lady of winter”, “Red sharks”, “Painted Skies”, “Masque of the red death”,”In dark places”,”Where dragons rule”, “Lonely”, “Burning bridges”,”Eternal world” and “Transcendence” from their “Transcendence” album.They also played “Dream Dancer” from their homonymous 1986 single and “War of the worlds” from their fourth album “Astronomica”. The fans really enjoyed the performance of the band and especially the performance of La Torre (even though there were some pre-recorded vocals). At the “Lost Reflection” track La Torre sang wearing a golden mask like the ones that the band used to have.

P.S.: A couple of days ago the Crimson Glory’s debut album completed 25 years of existence…

3 responses to “Crimson Glory, Wardrum, Out of the Lair, live report”