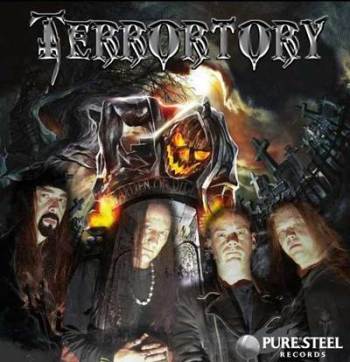 This is the new album of Halloween , which is an ‘80s metal band from Detroit. The band was formed in 1981 by the name Bitch, but soon they changed their name.They released “Don’t Metal with Evil” in 1985 and “No One Gets Out” in 1991. They also recorded “Victims of the Night” back in 1986 but this album was officially released in 1997. Finally they released “Horror Fire” back in 2006. In 2010 Pure Steel Records re-released “Don’t Metal with Evil” and “Victims of the Night” with a couple of bonus tracks. The style of Halloween is “heavy” with some dark horror parts in their music. The new album has a really nice cover compatible with the horror aesthetic that the band has. As for the music that “Terrotory” contains I would say that it is some kind of modern “metal” hybrid really uninteresting… This doesn’t mean that there aren’t any good parts in a bunch of songs or a couple of interesting songs (for example “Dead on…” and “Hands Around My Throat”), but this can’t save this album from mediocrity. In conclusion I think you had better stay away from this album… There are other releases of Pure Steel Records like Artizan, the re-releases of Halloween or Attick Demons where you can “invest” your money. This is the first disappointment for 2012.

Tags: 5.5, Detroit, Don't Metal With Evil, Haslloween, horror metal, No one gets out, private, Terrotory, us metal, Victism of tHe Night