Bill Tsamis-Sea Of Tranquility (No Remorse) 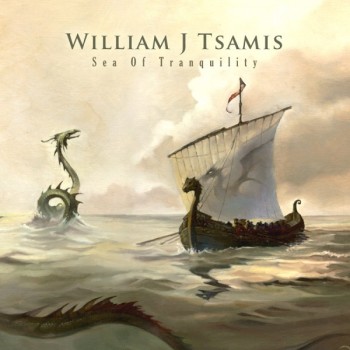 William Tsamis is the mastermind of the mighty Warlord, but except for Warlord he has also created Lordian Guard. He also released this album on his own back in 1996. “Sea of Tranquility” was only released on cassette form. The songs for this album were originally recorded in 1993-1994. The style of the album is something different from the previous works of Tsamis. “Sea of Tranquility” has NOTHING to do with rock and metal. The style of the music could be characterized as keyboard based atmospheric music with many piano parts. I should also say that the album is instrumental and that it lasts 35 minutes. I would say that this album is beyond the scope of our webzine. The whole album is full of lyrical and epic parts.

“Sea of Tranquility” is a really good unique sounding album that makes you want to listen to it again and again. My favourite anthems from it are the first two tracks of this album (“Icarus”, ‘King of Kings”) and one of the last ones (“Melody for Piano & Orchestra n. 4”). Especially the first two tunes of the album are really great EPIC compositions. When you hear them for the first time they make you want to listen to them constantly!!! When I heard the tune “King of Kings” for the first time back in 1997 (it was in the Warzone I compilation that was given by the Greek metal magazine Metal Invader) I was really blown away!!! I was really amazed by it and I was listening to it all the time!!  All the tunes of the album “travel” you and transcend you into the world of fantasy…

No Remorse Records pressed “Sea of Tranquility” for the first time on CD format. This CD version is limited to 500 copies and I don’t know how many of them are left. The sound has been re-mastered by Nikos Papakostas (Strikeligt, Convixion at Entasis studio). The CD contains an 8 page booklet and a really beautiful cover. So the fans of Warlord that want to hear epic music and aren’t bothered by the fact that this album hasn’t any guitar and bass parts should really hurry!!! In conclusion “Sea of Tranquility” is an album that all the fans of GOOD Music should obtain!!!