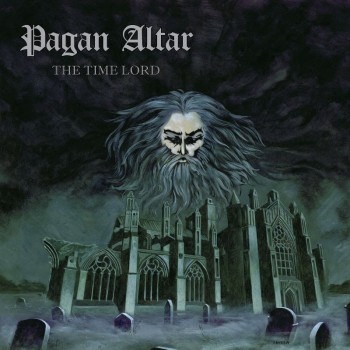 This is a new release from Pagan Altar which is an old metal act from England and is one of the bands that have their own unique sound.Their sound is heavy/doom metal with musical influences from the ’70s and weird, unique sounding vocals. These five songs here are recordings that were made in the late ’70s and in the early ’80s. This release was released in a vinyl and cassette format in 2004 and in 2006 respectively. It has also been released on vinyl by Buried By Time and Dust Records and on CD by Cruz Del Sur. Except for this release Pagan Altar have also put forth three albums (“Volume I” which was actually recorded in 1982, “The Lords of Hypocrisy”, “Mythical & Magical”). I really enjoyed “The Time Lord” especially the homonym track, “Reincarnation” and “Judgement of the Dead”. The band recently played in Athens for Up The Hammers Festival. From what I’ve learned even though their music is a bit difficult to be played live the majority of the fans liked them. In conclusion Pagan Altar is a good band with a unique style. So if my description tempted you then you should give it a try!