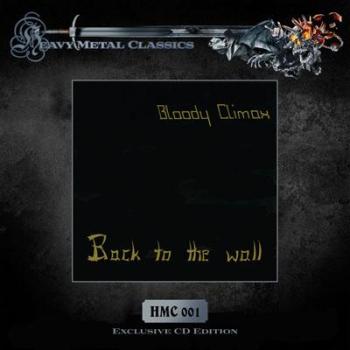 Bloody Climax  was a German heavy metal band. The band released a nice album back in the mid ‘80s entitled “Back to the Wall” and participated with a song (“Run for Cover”) in a compilation (“Breakout”).
“Back to the Wall” was one of the really good albums of the German metal underground of the ‘80s. The best anthems from  “Back to the Wall” are “Turn to Ice”, “Bloody Climax”, “Jailbreaker”, “Cinderella” and “No Paragon”. In this release along with “Back to the Wall” there are seven bonus tracks which were to be in the second album of the band which eventually wasn’t released. The best tunes from the bonus tracks are “Ride with the Wind”, “Fight for my Life”, “Straight from the Heart” & “Taken by Force”. Bloody Climax stands on high levels in terms of technique and song writing. So we have a really great release which lasts 78 minutes, it has been re-mastered, and has a nice cover. The CD is limited to 700 copies (if I remember well). In conclusion this is the best release I have reviewed in the last 6 months!! It is a release that all the fans of traditional heavy metal should hear!!!

P.S.: It is a fact that not all the tracks of this release stand on the same level. This doesn’t mean that the rest of the songs don’t stand on a good song writing level, though.

Posted by a knight of light on November 8, 2013 in Monuments, Reviews